Lately, I’ve become convinced that politics on the internet is a giant game of telephone.

[A] game played around the world, in which one person whispers a message to another, which is passed through a line of people until the last player announces the message to the entire group. Errors typically accumulate in the retellings, so the statement announced by the last player differs significantly, and often amusingly, from the one uttered by the first.

A great example is the ever-popular “genderbread person”.

2. After languishing for a few years, our stickfigure person who forges ahead with only a brain, a heart and ambiguous genitalia is back and now with a catchy name — genderbread person!  By now, gender roles (which had no specific body part before) have become “expression” and gender identity is simply “gender”.

This iteration also introduces Kinsey-esque scales for sex, gender, orientation and expression. I’ve written about this one before, as it represents a clear depoliticization of the gender hierarchy. I’ll just add that the scales are strangely crafted. For instance “expression” has masculinity and femininity on opposite extremes and androgyny in the middle. But “expression” should really have both masculinity and femininity on the same extreme (the saturation of gender) and androgyny on the other (the desaturation of gender).  The scales, as depicted here, are remarkably similar to what Janice Raymond calls “the cosmic male-female polarity” upon which hetero-reality is constructed.

3. Now in color. And with a disturbing amount of pink. 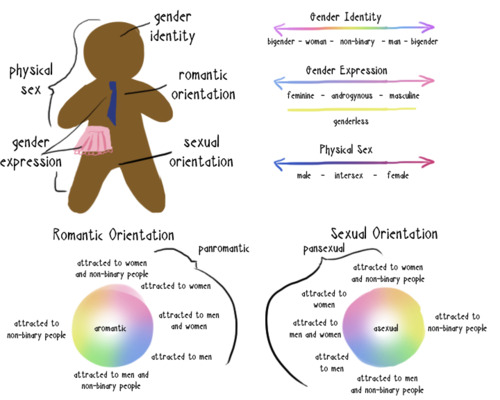 4. Genderbread person gets their romance on. A lot of romance. To the untrained eye, “romantic orientation” might seem identical to “sexual orientation” but they are in fact different. Somehow. Also, relevant.

5. Genderbread has really grown up now. A QR Code and multiple fonts. Wow. I especially appreciate that “gender identity” and “biological sex” are both based on hormones. Objectively.

6. Genderbread person has lost the person. But gained two-spirits. And a lot of psychology. Expression is now listed with the addition of “attribution”. Attribution implies a causal relationship of some sort with gender roles but it’s not clear what they mean except that they probably went to college. 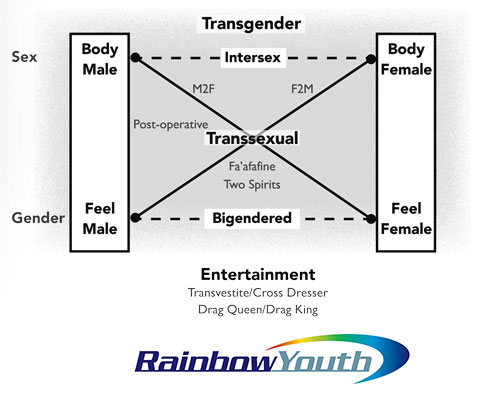 7. Here the concept has gotten a little hard to follow. The columns indicate that gender is how an individual feels regardless of their sex, but the rest doesn’t make much sense. 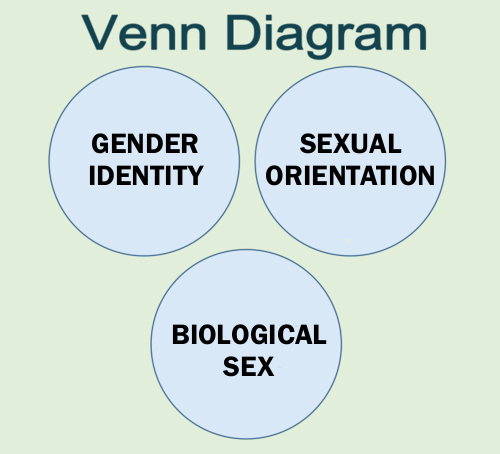 8. This version is a Venn diagram. We know this because it says so right there at the top. The creator of this masterpiece got some flak for bothering to create a Venn diagram without any Venn but that was in fact their whole point. (That gender, sex and orientation have no logical relationships.)

These last two diagrams are the first to eliminate “expression” or “gender roles” entirely in favor of simple “identity”. Sex, gender and sexuality are simply things an individual is, or feels and not how they behave or are forced to behave by their social or material environment. 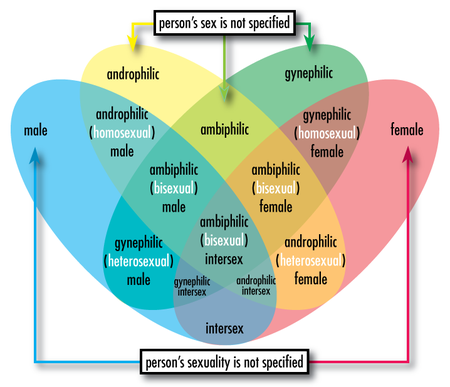 9. Continuing the Venn-era of genderbread persons, we have this four set diagram which depicts the fairly well understood spectrum of sexual orientation in as complicated a manner as possible, while also creating enough greek/latin compound words to make heads explode.

I’ve read that there are over 200 different sexual orientations, which probably far exceeds the number of people (outside of tumblr) that actually care. 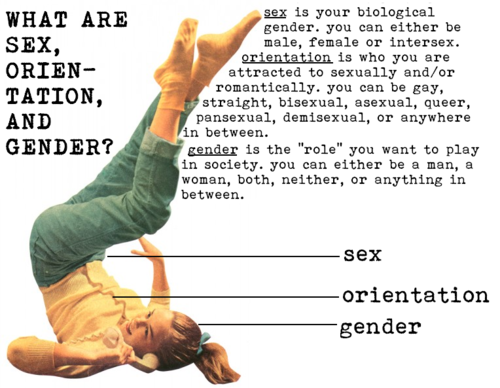 10. Finally, my favorite. The genderbread person is back but is now an upside down pornified pinup girl, who is clearly expressing her gender by gabbing on the phone. Probably about the how awesome the 1950’s were.

I appreciate this version the most because it’s exceptionally derivative, but in a condensed sort of way that betrays the previous versions. Here, gender is “the role you want to play in society” an incorrect but still fairly clever combination of identity, gender roles and expression. Orientation now includes both sex and romance, thus saving some major infographic real estate. And finally (ingeniously! or possibly accidentally), sex is your “biological gender”.

I have a couple of really big problems with all of these diagrams. First, I loathe the idea that individual traits map causally to social divisions, especially the assumption that biology leads to everything else. Also, the underlying assumptions about individual choice are the real driving force behind these diagrams: the idea that gender, expression, identity, etc are just choices people make and that’s that. The only remaining thing is for everyone from the pansexual-aromantics to the ambiphilic bisexual intersexed to simply respect everyone’s individual choices and everything would be great.

This doesn’t work because we live in a hierarchical world and a lot of people’s “individual choices” are hurtful and also supported by all of society.

Anyway, since I can’t resist joining this parade of stupid diagrams, here is my own special version of the genderbread person: